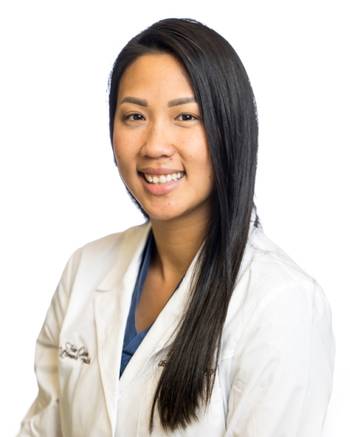 “As an ob/gyn, I feel grateful and humbled to share special moments with my patients. I strive to be an empathetic listener and partner on my patient's journey to good health. I love getting to know my patients and their families. This allows me to better understand them as people so I can help them with their specific needs and goals.”

“I love the continuous learning and improvement required to remain current with modern practice and with the standard of care. The love for my profession and my passion for learning drive me so I will always be able to deliver the best care possible for my patients.”

Kim H. Bui, MD was born in Prescott, Arizona, and later settled in Reseda, California, which is where she grew up. She went to Granada Hills High School and then graduated from UC Irvine in 2009. Afterwards, Kim took some time off to be with an ill family member.

Dr Bui’s mother was born in Vietnam and came to the US while still pregnant with Kim, who is an only child. Her mom went back to school and became a Physician Assistant (PA), specializing in women’s health, a field she continues to work in. Her mother has inspired and motivated her to never give up even when times are hard.

In 2012, Dr Bui earned a Master’s Degree at Eastern Virginia Medical School in Norfolk, Virginia and in 2016 earned her MD degree there. Next, she went to Denver, Colorado for her Ob/Gyn Residency, graduating in June 2020.

Interests: Spending quality time with family and friends, Cooking, Hiking, Traveling, Movies, Dogs, and being close to the ocean.